I said to my son earlier this evening that Megan Rapinoe is like Mesut Özil but with fire in the belly, and she just proved my point. The first touch here is amazing.

This is good from Paul Wilson on what the summer transfer window has become. I couldn’t possibly be more sick of it, especially now that every player in the world is at some point in the summer linked to every team. Ronaldo back to Man Utd? Almost certain! Messi to Stoke City? Our sources say that talks are very advanced. Rooney to Newell’s Old Boys? Those close to Wayne say he’s always treasured a secret love of Argentinian steaks and Cabernet.

But the season really does need to be shorter — and especially needs to end by the time the European league seasons begin. The window should close on August 15th at the very latest.

As I watched the USMNT in the Gold Cup, something occurred to me: Graham Zusi is the American James Milner. He’s a strong, capable player who is both faster and more technical than people think he is, and is willing to play pretty much any position he’s asked to play. I don’t think Zusi is as good as Milner — Milner is a really good footballer — but like Milner he’s amazingly versatile. Though by nature he’s an attacking midfielder, he’s done just fine as Bruce Arena’s preferred right back (cf. Milner as Jürgen Klopp’s preferred left back) and you get the sense that you could play him anywhere from striker to centerback and he’d not make a hash of it.

It wasn’t that long ago that Arsenal had an embarrassment of riches in central midfield, with Cesc Fabregas as the heartbeat of the team, scoring frequent goals to complement his many, many assists, a superb (when healthy) second creator in Tomáš Rosický, and exciting young world-beaters-to-be in Jack Wilshere and Aaron Ramsey.

Fast-forward a few years and Fabregas and Rosický are long gone; Wilshere has been unable to stay healthy and in any case seems to have plateaued or even declined in both technique and imagination; Ramsey has never been trusted by Wenger to direct the team; and the closest thing to a Fabregas replacement the club has had, Santi Cazorla, has been injured for a long time and, a few months from his 33rd birthday, may be effectively finished. (I hate to say that; Santi is one of my favorite players ever, and I devoutly hope Arsenal can get another year or two from him.)

This is not to say that Arsenal has no creativity in midfield, at least in advanced midfield: Mesut Özil is one of the most creative players in the world. And Özil is a far more active player than Arsenal supporters and detractors give him credit for: for instance, in a given match he’s likely to run a good bit more than Alexis does. But he doesn’t do a lot of that running with the ball at his feet. The Özil style is to find an open space on the pitch, receive the ball — sometimes in remarkable ways — and then make something happen. He will do this several times of game, and thus is one of the best chance-creators in the Premier League, and far more important to Arsenal’s attack than most people realize. 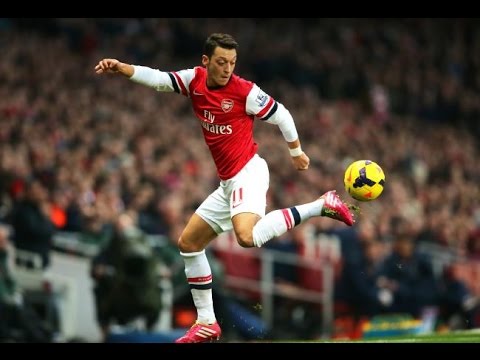 But though he wears the no. 10 shirt, he’s anything but a metronome, and in Santi’s absence Arsenal is desperately short of people who can secure the ball in the middle of the pitch and get it to attackers in good positions to threaten defenders. Too much of Arsenal’s attack comes from the wings, and while it’s good to stretch defenses horizontally — something many sides, even good sides, don’t consistently manage — there are distinct advantages that arise when you can begin attacks from a central location, chief among them the possibility of passing left, right, or straight ahead (and to do so on the ground or in the air).

Obviously Lacazette, as a striker, won’t help with this, and neither will the strongly-rumored target Thomas Lemar (a pacey winger indeed). So who could fulfill this role for the Gunners — assuming that the squad remains more-or-less as it is now? (Which of course may not happen.)

Aaron Ramsey. Wenger’s preference is clearly to play Ramsey either as a holding midfielder, partnered with Xhaka or Coquelin, or as a right-side attacker. But Ramsey clearly wants to play in the middle as a more-or-less classic no. 10, which is what he does for Wales (and very well too). In part because Arsenal has other players who can flourish on the right side of midfield, I am inclined to think that Wenger should give Ramsey a good chance at the job. But I don’t think he will.

Alex Oxlade-Chamberlain. I don’t think Ox has the close control needed to play this role — he’s better as a winger or quasi-winger with freedom to cut inside. His strength and pace make him a dangerous player, but I can’t imagine Wenger turning over the keys to him.

Jack Wilshere. Is it possible that Jack-the-Lad could return to prominence for the Gunners? It’s possible, I guess … barely. If he could recover the buccaneering spirit that once made him such a threat to defenses — five years ago there were few PL players who could run right at a defense the way that Wilshere could — I’d like to give him another chance. But of course it’s far more likely that he will be sold, or even loaned out again.

The kids. Chris Willock could perhaps have grown into such a role, but he’s off to Benfica. Jeff Reine-Adélaïde may well become a terrific player, but probably in a Pogbaesque way: an attacking midfielder, to be sure, but not a calm, assured, presence at the heart of the pitch — rather, something more like a berserker. Ainsley Maitland-Niles perfers to play central midfield and has done so, but is probably destined to be a fullback or wingback. Which leaves Alex Iwobi, whom Wenger says is a central midfielder rather than a winger — but keeps playing him as a winger. Will this be the year that he gets a chance to run the team? I doubt it. But it would be interesting to see what he could do.

Nobody. This is, I think, the most likely option: no one at all between the holding midfielders and the attackers, which will require the holding midfielders to advance the ball fairly often, and attackers to drop deep from time to time to receive the ball and then move it forward themselves. This outcome is especially likely if Arsenal habitually set up in a 3-4-3, since two of the 4 will be wingbacks, and the other two are likely to be given holding roles. And if Arsenal play a diamond in midfield, with Xhaka or Coquelin in front of the centerbacks, then we’re back to the whole question of this post: who plays at the front of that diamond? It’s a real puzzle.

Though the 3-4-3 really helped Arsenal stabilize and consolidate its defense near the end of last season, I don’t think it’s ideal as an attacking formation in the absence of a diamond-shaped midfield with a genuine no. 10. I fear the formation will mean a great many long balls, either from deep midfield or from the wing, and not many of the intricate passing combinations that Arsenal used to be known for. (And a lot of hope placed in those several moments per match of genius from Özil.) I also expect that smart defenses will put a lot of pressure on Xhaka and Coquelin, who have shown themselves susceptible to making very bad decisions when hurried (though when he has time on the ball Xhaka can be one of the best long passers around). But this is what happens when your manager only trusts versatile players on the wings, and doesn’t trust the true central midfielders at all.

In my judgment, the lack of creativity in midfield has been the chief reason why Arsenal have scored fewer goals since Fabregas left the team than one might reasonably expect. And I think that shortcoming will be a big impediment to the team’s success in the coming season, unless someone steps up (is allowed by the gaffer to step up) in a way I don’t currently expect.

This is a beautiful play by Clint Dempsey. Notice:

There are two American players with the vision and technique to pull off a play like this: Dempsey and Christian Pulisic. The USMNT desperately needs a few more such players, but where they’re going to come from I have no idea.

As the new season of European football approaches, many players are faced with a momentous decision — no, not whether or not to seek a transfer to another club: how to wear their hair. Last season saw some unfortunate decisions in that regard. Exhibit A:

Marouane, please. There’s only one right way to do that kind of do:

Conversely, Neymar, whose hair has always been adventuring, often in ways that seemed wholly outside the control of the man under it, surprised everyone last year with a totally normcore look:

But this preseason, as he pursues a move to PSG, he’s gone back to an old favorite, frosted tips, and is so pleased with his look that he’s leaping for joy:

We’ll see who surprises us in the coming year, but for those players who are still uncertain about the route to take, let me make a suggestion: Find a look that expresses who you really and truly are, in your heart of hearts, and stick with it:

That’s right, Arturo — give yourself a round of applause. You, more than anyone else, deserve it.

I watch a lot of soccer. Watching soccer makes me want to say things. I plan to say some of those things here.